Not because you have been doing it the same way forever don’t mean that it is not incredibly stupid, which is equivalent to doing things the same way each time looking for different results. Nothing exemplifies these saying more than Driving, since the introduction of the Automobile the first 1000 Drivers drove the same way we drive today. Pay attention to an army of Ants, too and from the Colony they travel in a tight formation not even one Ant-length apart. When I observe Rush Hour traffic this is what I see, if someone sneeze there is a pileup and I am late to work because I didn’t leave a half hour earlier. Well my Friend don’t feel bad about not leaving early because not only do we travel like Ants, but we think alike with the same mindset about leaving early and spacing ourselves, thus having a safe and pleasant Commute.

Remember that you are Traditionally looking for different results for twenty years of traveling the same Route with the same Commuters with the same mindset, it’s not going to happen. Until you change your Driving habits and your poor calculation of Estimated Time of Arrival, not taking into consideration Murphy’s Law, compounded with the way you and your fellow operators use the Roadways like mad Ants completing your last Lap at Poccono 500 Raceway. I have been Driving for over forty years each year statics climb, as the saying goes if it’s not broken don’t fix it, trust me it needs fixing. 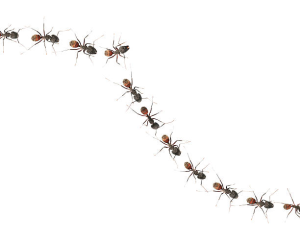 The average Driving Instructor teaches fundamentals such as spacing, ten MPH one car length, the average Driver gets his License and from Day one with minimal Driving skills he is glued to the Bumper of my 35 thousand Dollars Plastic Styrofoam and inexpensive Metals, manufactured car, with a ten thousand Dollars interest loan, tacked on to two thousand Dollars in Auto Insurance yearly. In 1988 I had a brand new inexpensively made car, someone backed up into it and caused 3000 Dollars worth of repairs. Imagine having an accident at 65 MPH with that same car which is very popular today. Why should I not be Antsy about your Asinine Bonehead approach to Driving thinking that you are much more skilled than you really are. Between Driving commercially and Road trips cross country I have racked up millions of anxiety free miles, because I always spaced myself to compensate for your errors. What irks me the most about commuters is, If I space myself two car lengths there is always some idiot to put his car in the gap. Three times in my Life I safely navigated my way through hundred Car wrecks, three things contributed to these Wrecks, Road conditions average to poor Driving skills and the way you drive like Ants marching.

Great Driving skills such as being able to evaluate imminent Hazards and putting counter measures in place before they happen prevents pileups, having a superior engineered vehicle like a Suburu or a Volvo dose’nt hurt. Once traveling interstate 81 from York to Scranton it started to Snow, then it turned to icy Rain back to Snow, then nothing. I didn’t like what I saw in the way others were Driving like Ants marching on a road surface that was unpredictable, I backed off the pace by about fifty car lengths, when you do things like that inexperienced incompetent Drivers can’t read the play, so they pass and blow you off on their way to join the developing catastrophe up ahead, as the saying goes Fools rush in. As I settled back in my comfortably spaced traveling distance the Ants up ahead of me found a stretch of road covered with Ice, they were going too fast and they sat on each other’s bumper like Ants marching. They littered the Median and Ditches, on an Ice covered roadway you never want to apply your brakes. I felt like the Tortoise passing the Hare, I didn’t even think about stopping, that was a dangerous place to be in with other Ants behind me in a hurry to join the others in the Ditch. Remember Tradition can be incredibly stupid. As they say old habits die hard.

Growing up in New York I had many offers to become infamous, one to join organize Crime, in order not to bring shame to a strong Willed Christian Woman I call Mom I turned them all down. It's her style of Parenting that kept me straight and strong to survive my Turbulent Youth my Goal is to give strength to Parents of problematic Teens, so they also can overcome. I am presently semi retired living out my Life with a bang in Florida writing my way into the next Life. View all posts by Anthony Dixon

This site uses Akismet to reduce spam. Learn how your comment data is processed.